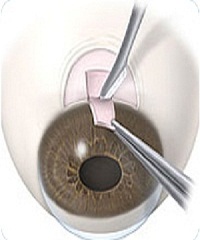 Trabeculectomy is a surgical procedure used in the treatment of Glaucoma to relieve intraocular pressure by removing part of the eye's trabecular meshwork and adjacent structures. It is the most common glaucoma surgery performed and allows drainage of aqueous humor from within the eye to underneath the conjunctiva where it is absorbed. This outpatient procedure is most commonly performed under monitored anesthesia care in a half awake state using a retrobulbar block or a combination of topical and subtenon anesthesia

An initial pocket is created under the conjunctiva and Tenon's capsule and the wound bed is treated for several seconds to minutes with mitomycin C (MMC, 0.5-0.2 mg/ml) or 5-fluorouracil (5-FU, 50 mg/ml) soaked sponges. These chemotherapeutics help to prevent failure of the filter bleb from scarring by inhibiting fibroblast proliferation. Some surgeons prefer "fornix-based" conjunctival incisions while others use "limbus-based" construction at the corneoscleral junction which may allow easier access in eyes with deep sulci. A partial thickness flap with its base at the corneoscleral junction is then made in the sclera after careful cauterization of the flap area, and a window opening is created under the flap which a Kelly-punch to remove a portion of the sclera, Schlemm's canal and the trabecular meshwork to enter the anterior chamber. Because of the fluid egress the iris will partially prolapse through the sclerostomy and is usually therefore grasped to perform an excision called iridectomy. This iridectomy will prevent future blockage of the sclerostomy. The scleral flap is then sutured loosely back in place with several sutures. The conjunctiva is closed in a watertight fashion at the end of the procedure.